My Brother Mark Visits to Korea


After 27 hours of traveling through San Fran and Tokyo, I finally reached my destination of Seoul. Groggy yet elated to have arrived, I had prepared Chris for what I needed. Any international flight that crosses a major ocean, no matter how much I eat on the plane, leaves me starving. So off to get food we went! This was going to be a vacation with a lot of eating and drinking!!!


Walking on the winding streets of downtown Seoul there were SO MANY young women. I counted the number of men and women on the tortuous, bright streets full of convenience stores, hotels, and open air food stands, and there were 6 women for every 4 men. Chris’s efficient efficiency apartment is just a few blocks from Sungshin Women’s University. Why had I not visited earlier?! This trip was not to be about women though. Food was on my mind.


He led me quickly down a bright pedestrian street full of jewelry and clothing stores for women until we reached a restaurant that was happening. The table-grills were prevalent, ubiquitous and popular. Chopsticks and small shot glasses full of rice vodka were lifted in the air every second. I could see the Koreans like to have fun. We ordered grilled bacon. It’s called san-keaup-so. It was accompanied by kimchi, the famous hot-n-spicy cabbage that I adore. We pigged out. They kept bringing spicy vegetables, miso soup and rice vodka. It was great. I slept well that night.


While eating grilled bacon, I remembered a question I like to ask friends: If you had to give up all meat except for one type (chicken, beef, pork, seafood, or some other type of meat), which would you choose to eat? I had always maintained pork is the meat to eat. Think about it! You get ham. You get pulled pork sandwiches. You get pork tenderloin gently baked with figs. And you get bacon.


Chris has adopted the Asian work ethic, and he must wake up at 5 am to be at work at 6am. Quite often he works 12 or 14 hours. This Friday he gets the afternoon off to go sight-seeing around Seoul with me. I slept in. zzz. For lunch we splurged at one of Seoul’s finest restaurants, Top Cloud Grill, at the top of a skyscraper. They do not know who they are messing with. We’re Americans. I order the all-you-can-eat lunch buffet. We know how to eat, and we cleaned that buffet out. We pigged out. After lunch we toured the historic royal palaces of Seoul, planned to meet some friends and got ready for the evening of more eating and drinking. 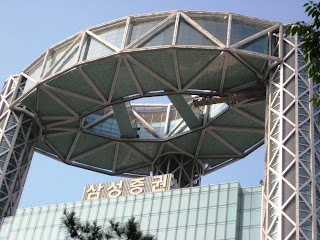 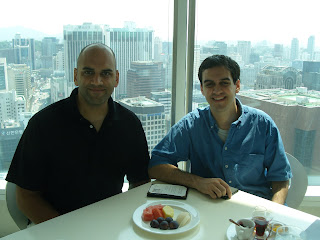 For dinner we were cajoled by a group of friends to hit another grill. I love grilled meats. Grilled bacon again. One type of pork was plain while the other was marinated in spicy Korean sauce. We pigged out. I couldn’t get enough of the kimchi. Chris even likes to grill the kimchi. We wanted more food, so we ordered beef. They served us another helping of grilled bacon. This restaurant only served pork. Mmm… bacon. I was starting to get sick of grilled bacon. The second helping of bacon was devoured anyway.


We awoke early to take a scheduled tour to the De-Militarized Zone (DMZ). Stepping into North Korea, although only briefly, was surreal. The DMZ is still a war zone. Justin, a friend of Chris, wanted to come on the tour, but Koreans are not allowed. A special 6 month wait list is needed for Koreans. Instead, Justin invited us to his house for a traditional home cooked meal: grilled bacon. The thought of grilled bacon for the third night in a row began to wear on Chris and me. We sat on the floor of their living room, a Korean tradition, and ate grilled bacon. We pigged out.


After dinner we sang karaoke. The 90 minute bus ride across Seoul back to Chris’s apartment had me dwelling on grilled bacon. The next day was a big day. Chris and I were considering becoming vegetarians.


After visiting Chris’s favorite Christian church, we head out for lunch. Anything but grilled bacon. Ugh. Chris tells me to try a Bob Stick, which is a rice stick with meat on top. I order the beef. He orders the pork. I don’t know if it was karma or fate, or maybe it was simply bad luck, but while trying his pork Bob Stick, I was clumsy and dropped a huge piece of pork on his lap. The God of pork was talking to us. No more bacon. Fortunately, a friend of Chris’s brought us to a restaurant where we ate beef vegetable soup, cooked over an open flame at the table. 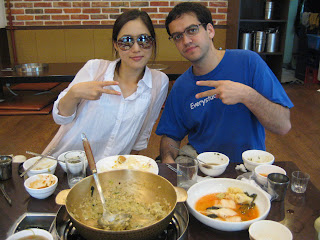 After lunch we hiked. We hiked 5 miles up a mountain half a mile tall overlooking all of Seoul. The view was amazing. At the top of the mountain I begin to open my snacks, and I enjoyed a delicious Korean Oreo cookie. I don’t know if the thin air made it taste better or if the different recipe for Korean Oreo cream caused the party in my mouth, but the cookie was as amazing as the view. I did get pissed at Chris though. He took an Oreo cookie and then traded the rest of the 3 cookies to another hiker for a raw cucumber. I burned 5000 calories to hike up a mountain and then I had to eat a raw cucumber!? I grumbled as I ate my half of the raw cucumber. I was not happy. We were beginning to act like young brothers again.


After climbing down the mountain I threatened to take him to eat grilled bacon. We ate grilled beef instead. We pigged out.


This was one of the 14 hour work days for Chris. We go out for lunch. He tells me to stop mentioning grilled bacon. I say it 4 more times just to spite him. We argued like when we were younger. It’s clear we are brothers. And it is nearly time for me to return to the USA. We order beef and cheese bi-bim-bap, which is a super hot rice bowl full of beef, cheese and vegetables. The stone bowl is seriously about 500 degrees, and the rice and vegetables cook as you eat. More kimchi. Koreans never get sick of kimchi, and I still adore the mouth-watering spicy cabbage. We pigged out. 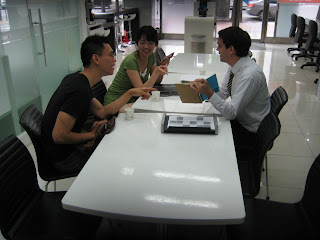 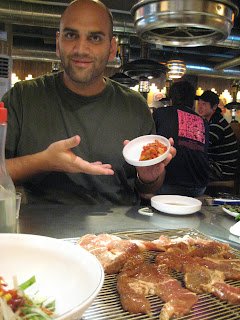 
I flew back to the USA. My goodbye to Chris is short, fun and full of love. It’s a quick, manly hug and slap on the back. I don’t like sad goodbyes. It will be a long, long time before I can eat bacon again.