A Brilliant Idea in Korea

In Korea, they have exercise equipment placed throughout Seoul. Most of the time they're in parks, but they're also on the side of bike paths and on top of mountains... and MANY people use the equipment. It's nice, simple, and weather proof.

What a great idea! One thing I really admire is the Korean's determination to be healthy and get exercise. Actually... I see it more in the elderly than in the youth, here. A LOT more.

The exercise equipment is a really great idea - cheap, and practical. This is the kind of thing that I think we need in the US, where so many people are overweight that it's considered "normal" to be chubby... and everyone who's not overweight is "skinny". It's ridiculous.

Here's an example of what the equipment can look like: 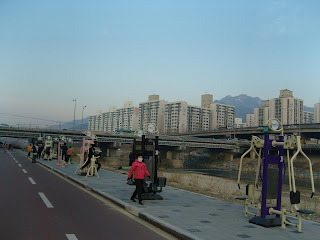 Posted by Unknown at 오전 7:23 댓글 없음: Links to this post

I saw a nice young couple walking along the stream near my house while I was on my way to the PC방 (here). It was a cold night, so the young man took off his jacket and gently placed it on the girl's shoulders. How romantic!

Then the girl pulled it off and pushed it against his chest.

Then the guy gently placed it over her shoulders again.

Then the girl pushed it off her shoulders and let it fall on the street before hocking a giant loogy and spitting it in the gutter.

Then the guy picked up the jacket, brushed it off, and forcefully put it on her shoulders and held on to it so she couldn't take it off again.

How romantic! LOL - Sorry, I don't have a picture of this one.
Posted by Unknown at 오전 7:19 댓글 없음: Links to this post

Okay okay okay! I could NOT help myself! I was riding the bus home from work today... TODAY... and when the bus was stopped in traffic, I looked out the window and saw this. And this is one of the benefits of carrying your camera around with you everywhere you go! 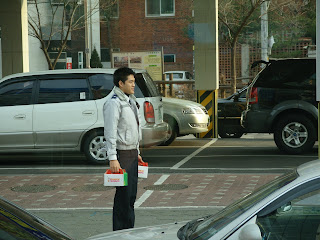 This is a police officer - this is what the uniforms look like. Of course, they aren't armed with guns. People in Korea don't have guns.
Posted by Unknown at 오전 6:10 댓글 없음: Links to this post

My First Suit and Tie

I wasn't going to buy a tie because I already have one that my dad gave me in high school. :) It's blue, and it's just fine - but when I walked past this tie, I had to buy it. It lured me in.

Cool huh?
Posted by Unknown at 오전 5:57 댓글 없음: Links to this post

In November, I started an English Discussion group in my neighborhood. The idea was that I wanted to meet people who live near me and who speak English. So I put up some fliers and got some responses. Of the responses I got, I met two people who consistently want to meet and have conversation.

Jay - is a Korean man who has done a lot of traveling. He's lived in the USA and Singapore and probably some other places - and he's visited many more places than that. He married a Chinese woman, and they're both very nice.

Amy - Amy is married with two children. She spends her time taking care of her kids, and has studied English in California for a while.

Both want to practice English so they don't lose it. We discuss anything, and it's quite good. I really enjoy it. We talk about politics, religion, and everyday stuff. 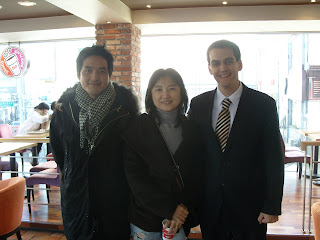 As a side note... you'd probably never guess - but we're in a Dunkin Donuts. They're a BIT nicer in Seoul. :)
Posted by Unknown at 오전 5:34 댓글 없음: Links to this post