When I got here, I found out I had a roomate. My contract says I might have a roomate, but before I came, I asked about it and they told me I would be living in my own place. So that's what I was expecting and I was really looking forward to it! When I arrived, my roomate was out having fun, so I went to sleep in the apartment not knowing who the heck I would wake up and see. I was a little angry because I really wanted to live on my own.

As it turns out, my roomate is really cool. His name is Mike and he's from Pittsburg. He has a few flaws... you know... like, for one, he's a Steeler's fan - not a Bears fan. :) That was a joke. hahaha - no we get along great. We have very similar habits (good and bad, and we work together to find creative ways to get around our bad habits). We have similar taste in food and a lot of other things - so really we get along great. We both like to talk (too much). When we do laundry, we have to hang our clothes out to dry on the little balcony - and we both leave our clothes out drying for a week before taking them in - out of pure laziness, even though they dry after about one night.

We have trouble finding motivation to do dishes... so we made a pact that we would get rid of all our dishes except ONE plate and bowl and spoon/knife/fork/cup for each of us. That way, we use our own stuff when we eat and we HAVE to wash it if we want to use it again. hahahaha - hey, it'll work!

But we have fun, so I look forward to a good first year, here. 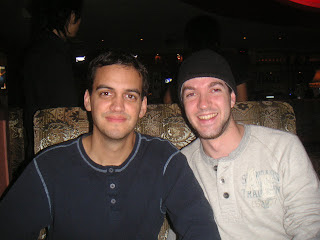