My friend Sujin lives in Dobong - near the Dobong Fire Station and a large department store called HomeEver. Also in this area is a very large church building that's shaped like an Egg, so when I went to visit Sujin for the first time she introduced it as the "Egg Church". I asked her why she doesn't go there since it's closer and she told me they believe some strange things that aren't really Christian teachings.
That was several months ago. Fast forward to a couple weeks ago - I was talking to the pastor of my church, and I told him I would catch a bus near the Egg Church. He laughed and then said I shouldn't let them hear me call it the Egg Church. So I asked him why and he said it's not an egg; but they believe it's a spaceship and when Jesus comes he will take the whole building.
"REALLY!?! That's SO interesting!" I said to him.
If you'll notice - the egg-shaped spaceship has little connectors to the building, just like a shuttle would have - and also, above the spaceship is a section of the building where people can buy lofts to live in - and within the church, it's supposed to be a really great honor to own one of those.
This is just one example of a cult church in Korea.
So I took a picture of the egg-shaped spaceship church for you to see. ^.^ 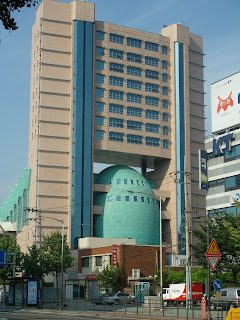 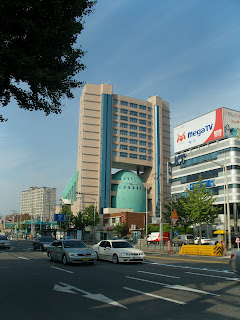 Below is a video of Lee Hyo Ri. She's very popular in Korea. Recently, in one of my classes, I asked my students "who is the most beautiful person in Korea" and some of them said "Lee Hyo Ri". She's a pop singer who has been around remarkably long. Most pop singers are famous for some years and then replaced by newer younger ones. But Lee Hyo Ri has won many awards here and keeps coming out with hit songs.

Lol - I'm almost positive you will NOT like this song... but let me tell you... it's popular here. And it's actually really cute when Korean girls imitate Hyo Ri from this video when she dances around and says "okay!" - hahaha

Check it out. Also - do an image search for "Lee Hyo Ri" to see how beautiful she is - this video doesn't do her that much justice, in my opinion.