Forrest Dawkins came to visit (no relation to Richard Dawkins).

It was a blast. We had a great time. Forrest is a friend of mine from my days at the University of Illinois at Urbana-Champaign. He's a real funny guy, and we have similar views. So it just happens that we both accepted teaching jobs in South Korea the same year. He started a few months before me. The only sucky thing is that he's real far away. He's in the extreme southeast of Korea. I'm in the extreme northwest.

But he came up to the area to visit some friends and was able to spend the night at our place. We relaxed and played some Halo 3 online (my gamertag is Psalm51 in case you care). 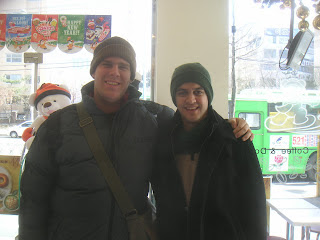 Forrest also gave me a sweet Xbox game called Assassin's Creed. MAN it's SO awesome! Basically, you're an assassin and you have to carry out all these missions. The game play is amazing, the world you play in is HUGE, the graphics and detail are awesome - it has a gameplay feel similar to the Grand Theft Auto games. Man... you have to get it, or at least rent it.
Posted by Unknown at 오전 9:35