Okay, so I was in the subway. It was the same night I saw that dude spitting near the pay phones (see previous post). I was waiting to meet 김누리 Kim Nuri, so I stopped at a little grocery store attached to the subway - nearby. I bought a few cans of coke and pepsi - and a loaf of bread. When Nuri arrive, we were browsing some of the shops and I left my "bag of groceries" on a large metal freezer-type-of-thing.

I kid you not... it was out of my sight for TEN minutes - and when we came back? It was GONE! WOW! I was SO surprised! When we went to a shop, Nuri said "Chris! You left your back!" And I said, "No big deal. It only has bread nad some pop in it. Who would take that?" Well... SOMEBODY did take it! Crazy. I hope they were REALLY hungry and thirsty! I hope it was worth it. WOW. If somebody wanted that stuff so badly, I would just give it to them. No need to steal that.

Anyway - I didn't care... I was just shocked. Here's a picture of where I left my bag. 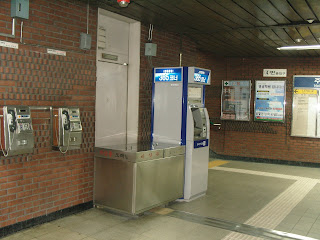 Hi, I just wanted to tell you I really enjoy your blog. I think it would be really cool to teach English in another country, so I was stoked to see someone blogging about it.
Please keep up the good work and keep us posted :)