A week and a half ago, Mike and I sat outside for a while playing the nearby claw game. We were playing the heavy weight machine. Mike wanted the MP3 player. We almost had it SO many times - and we tried SO hard! But in the end we couldn't get it. It got so intense, there were a few people meandering around. One guy started watching us for a while (watchers are common). He started trying to communicate with us and tell us how to get the item. Mike smokes cigarettes lightly here because they're so cheap... about $2.50 a pack. So people sometimes watch us play and bum cigarettes - it's friendly and social.

This guy turned out to be pretty cool. He's a crane operator - of all jobs - and we're playing the claw game. He played the middle weight claw game, won a couple lighters, and gave one to each of us for a present. Actually - all in all, we've probably received 4-5 lighters as presents from those games.

Anway, when we finally called it quits - No Hoon started to walk home with us (we live only a block away from that claw game). But I stopped half way home and said "I'm hungry. I want some chicken."

So he lead us to a place (it was about 1am) and we ate chicken and drank beer. We met some of his friends that worked at the place we were eating - and we had a great time. So we met a new friend at the claw game and we ended up going out with him again the next weekend. 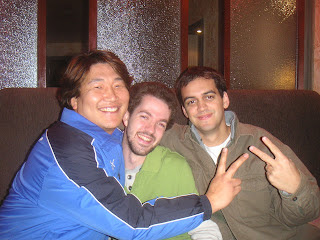 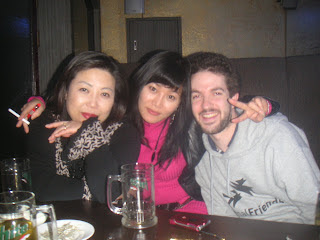