Before coming to Korea, I knew I wanted to study a martial art at some point. I assumed it would be Taegwando since it's so popular and it originated in Korea and is used by the Korean military... but that's not how it worked out.

The husband of one of my co-workers has a very good friend who is a Hapkido master - and he expressed interest in learning English. So, I was able to get connected with him. He grew up in the neighborhood where I live and he lives nearby. He's been studying Hapkido for about 17 years, and he studied Taegwando for some years before that. But he has a center where he runs Hapkido classes.

Hapkido is like a mixture between Taegwando and Jujitsu - it's self-defense. Here's a little blurb about it form Wikipedia.org

Hapkido aims to be an effective form of self-defense and employs joint locks, pressure points, throws, kicks, and other strikes. Hapkido practitioners train to counter the techniques of other martial arts as well as common "unskilled" attacks. There is also a range of traditional weapons including short stick, cane, rope, sword and staff which vary in emphasis depending on the particular tradition examined.

Although hapkido contains both long and close range fighting techniques, the purpose of most engagements is to get near for a close strike, lock, or throw. Hapkido emphasizes circular motion, non-resisting movements, and control of the opponent. Practitioners seek to gain advantage through footwork and body positioning to employ leverage, avoiding the use of strength against strength. 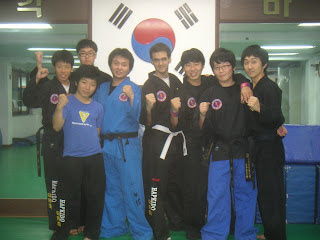 The guy in the blue uniform is one of the instructors. The guy in the black uniform next to me is the master who runs the classes, and the guy on the very right is the other instructor. They're all great guys. There they are below again. We went out for a few drinks a couple times - the second time I brough my roomate and it was a lot of fun. 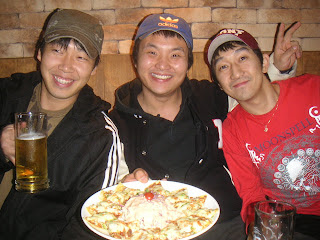 thanks for updating! Good to hear hapkido is fun. Give me a call sometime.