My Desk: Eeyore and Sponge Bob

This is my desk at work. Eeyore keeps me company. He carries my pencils and pens and stuff (my first pencil case since elementary school!). The kids like him too, although not many of them know he's Eeyore.

I also have a few GIANT erasers that I won from claw games. Several items in the claw games are weighted down with either clay or giant erasers. I like the erasers because at least they have a practical purpose when you win the item.

Anyway, one of the giant erasers is yellow, so I colored marker on it to make it look like Sponge Bob Square Pants. He's friends with Eeyore.

I also brought my mini-Totoro to work. The one my friend Christine Chen gave me! :) But the kids at work thought Totoro was too cute and they wanted to borrow him and give him back later... so I got scared and just brought him home. The others can get lost or damaged or destroyed and it's no problem - but not Totoro. He was a gift from a good friend, so I have to keep him safe. 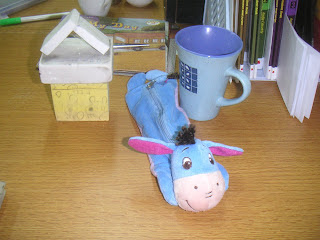 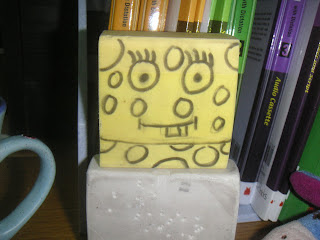