A Wild Night Out: Casino and Claw Games

In early November, Mike and I had a fun night out. We went to a Casino in Seoul. It's pretty far. We take the subway and taxi... so it takes about 2 hours and costs about $10 to get there. It's on the very far end of Seoul in a hotel. It's REALLY nice. The Casino isn't huge, but it has Texas Hold'em tables and other stuff. It has a little restaurant with a menu and free food. Anything you order is on the house... their way of getting you to relax and stay. As soon as they can, they play non-stop happy Christmas music (noticable). The waitresses are all really cute. Pretty much everyone there speaks English and is a foreigner. Koreans aren't allowed to gamble in Casinos. I don't know why! So all Casinos are catered to foreigners. Anyways, we went and had a lot of fun.

Mike loves Texas Hold'em and he's pretty good at it. I'll make another post on that another time. So he played cards the whole time.

Mostly, I sat and watched. But for kicks, Mike stuck $10 into a slot machine and said, "here. Play this while I play cards." He giggled a little as he stuck the money in and I was objecting. Slot machines are SUCH a waste of money!!! Mike agrees with me... but he just did it for kicks. Anyway, after pull after pull on the slot - I was down to my second-to-last pull and... DING DING DING. I won $63. Cashed out. I gave Mike about 2/3 of the winnings.

You can guess it. After watching him play cards... eventually I wandered over to the Roulette. DOH! House always seems to win. I lost $100 on Roulette. So, feeling pretty crappy, I wandered back to watch Mike play cards. Mike stood up and came over to talk to me again. The nearest seat to the card table is at a slot machine. So I told Mike I lost $100, and he stuck another $10 in a slot machine, then handed me another $10 and as he walked back to the poker table said, "play that." WHAT A WASTE! WE DON'T WANT TO GIVE THE SLOT MONEY WE WON BACK!!! So I considered KEEPING the $10 he handed me, but since he told me to play and it was his donation... that's what I did. Well, I ended up winning another $50 on slots. So as I sat there staring at my money... I thought... that would be nice to get my $100 back. So I took my newly won money and put it on red. All on red! Double up and I have my money back! Lose it, and I'm just back where I deserve to be.

It landed on red. ALWAYS pick red. It's the winner.

So I walked out even. :) Mike walked out with $200 extra dollars just from Poker.

We had this awesome plan for the way home. You see, as we arrived at the subway station near the Casino in Seoul, we took a taxi and drove from the subway to the casino - and we saw SO MANY claw machines!!! There were TONS!!! So we had this awesome plan to play EVERY SINGLE machine at LEAST once on the way back! It was a NIGHT OF CLAW MACHINES!!! And we also decided to take a picture at each machine we played.

The first machine sucked. It took our dollar, as expected. So we played the next machine on another corner. When Mike went to put money in, it wouldn't accept his dollar bill! Instead, it started SPITTING money at him! THREE dollars came out!!! So we put one back in and played the machine, and I won THREE torch lighters in a ROW from ONE dollar (which is 6 trys). It was amazing! Then we took a picture, and remembered that we forgot to take a picture at the FIRST machine we played! So we went back for another picture - but after the recent luck, I insisted on giving the first machine another try. I wanted something specific: a little lighter shaped like a mini golden gun. We put a dollar in... and I WON it!!! We were on a ROLL!!! The next machine, Mike played... and on one dollar, he won a BIG prize! On first glance, we thought it was an MP3 player - which is common in claw machines, but it turned out just to be a mini digital radio with headphones. But it's stylish.

Anyway... we hit claw machine after claw machine, and on EVERY SINGLE ONE - except two - we won at LEAST one prize! By the time we got back to the subway station, Mikes bag couldn't even FIT any more prizes! We were laughing SO HARD. I felt like a thief, we won so many prizes!

We started a box in our apartment collecting the prizes won from claw machines. We have all sorts of things - several lighters - a couple LED lights, a hand held game device, a volleyball net, a cell phone case, and some other stuff. One night (a different night) Mike won a HUGE lighter that looks like a pistol from the 1800s. You pull the trigger and a torch flame comes from the top. We didn't even know it was a lighter at first - but it's definitely my favorite item... well... that and the volleyball net. :)

Pictures range from us dominating the machines to us getting ready to destroy them. :) 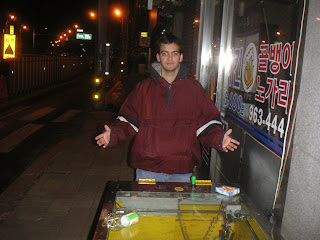 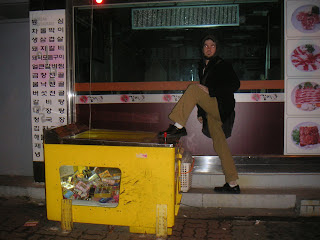 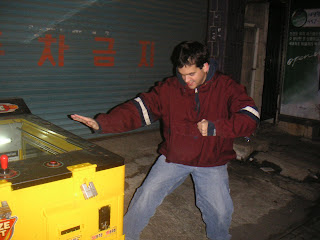 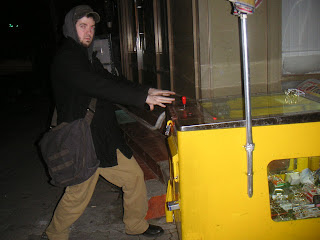 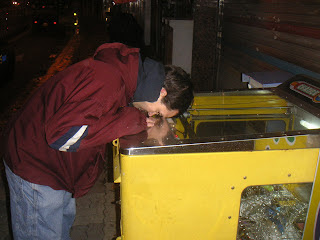 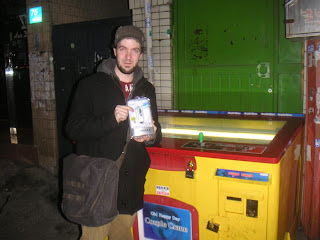 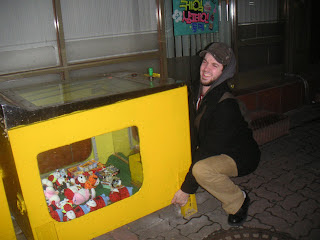 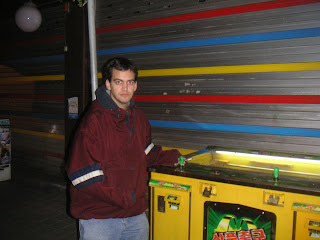