In Korea, it's common - anywhere - to see toilet paper sitting around on counter tops and desks. Businesses and homes use toilet paper instead of tissue like kleenex to save on expenses.

Mike has a big problem with it. He refuses to use toilet paper to wipe his nose, and he hates seeing it everywhere. Basically... toilet paper reminds Mike of a dirty butt or a used toilet. Something like that. So... one day, as a joke, I "TPed" his desk when he was gone. Of course I didn't use too much. I didn't want to get in trouble with my boss. Mike was so mad. hahaha - I wish I could have seen it!

Another night, Mike went out for the night (he's a social butterfly) and, as a joke, I took one of our new clean rolls of TP and set it on his pillow. I felt a little guilty afterwards because I know it really bothers him, and I was a little afraid of the repercussions... but I went through with it. He was mad again (not a serious mad, a good-sense-of-humor type of mad).

There were no repercussions - although he said he thought about it a lot. And I told him that was my last toilet paper prank. I COULD keep myself entertained for a long time with this... but I know he really doesn't like it so much. :) hahahahahahaha 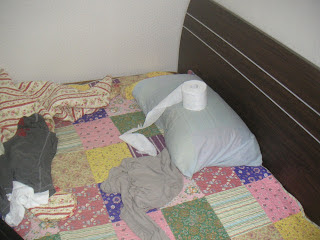