I thought that it's about time you see what my apartment looks like! So I took some pictures. Here it is! If something in my apartment looks strange and you want to ask me about it - please do! As a foreigner, sometimes I get tricked into buying things I don't want, so I just end up keeping them to be practical!

CAPTIONS ARE BELOW THE PICTURE: 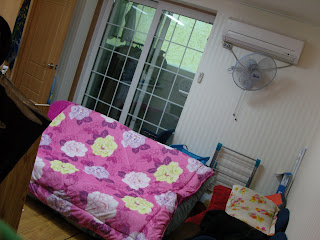 A picture taken from the entrance. The big pink thing is my futon. It's in its "reclined couch" position right now. The big pink blanket is something I bought... I couldn't pass it up! I don't really care for the color or design... but if you could touch it, you'd understand. It's SOOOOOOOOO soft!!!

That "junk" in the right corner isn't mine. I'm storing stuff in my apartment for a friend who moved.

I installed that fan myself. It's right below the air conditioner, so in the summer, it blows the cool air around the apartment :)

You see the back sliding door. There are a bunch of windows there, but I put some light green paper on the window because it's right across from a gym and people can see inside, perhaps. I enjoy privacy. if I want to see outside, I can just open the windows. That little room isn't good for much - but it's good for storage and for drying my clothes. 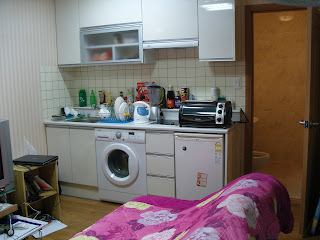 A picture taken from another corner. I'm standing near the fan you see in the first picture. You can see my little refrigerator and my washing machine. 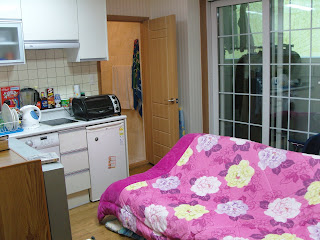 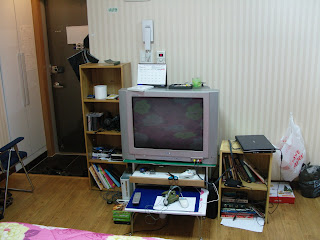 To the left you can see my door and the little area where you're SUPPOSED to take your shoes off.

That big white closet to the left of the door is actually for shoes... but I almost never put shoes in it. I just leave them on the floor, there. The closet is great because it has a bunch of shelves, but it reaches from the floor ALL the way to the ceiling! So I have lots of shelves to store stuff. :)

Also, my door is VERY secure, so I can stick magnets to it. That's particularly useful because now I have a markerboard on it, and when I leave my apartment I have to look at the markerboard and it reminds me to remember things. :) 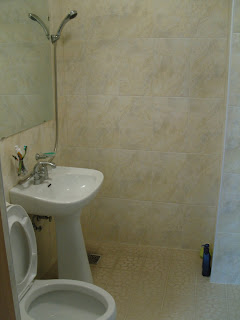 Last but not least is my bathroom. It's pretty spacious... especially compared to my PREVIOUS bathroom, in Korea! Thats my shower. It's pretty traditional, if you've ever done some traveling. I've seen similar things in France and Egypt.

All in all, I'm pretty darn happy with the place I got! There's just one exception... and that would be the fact that my building is PRE-WIRED for high-speed internet. As I've mentioned, Korea and Japan have the fastest internet in the world. Well, the biggest internet company in Korea is called "KT" - and I HATE this company. I STRONGLY recommend against getting their service, if it's at all possible to avoid it! I'll make a separate post regarding my personal experience and opinion as to why I hate it. I wouldn't want to spread any misinformation, after all.

In any case, I'm forced to get the KT service, because of the way the buidling is wired. -_-
Posted by Unknown at 오전 2:13