Young Korean guys (especially) love video games. If you can remember back to my first year in Korea, I posted about the Korean professional gaming. If you don't know what I'm talking about - browse my 2007 posts and look for something about Starcraft.

Anyway, Ellie and I met in Gangnam recently (that rich district of Seoul) and saw the movie "Yes Man" - with Jim Carry. It was good. Funny. You should go see it. And it's particularly appealing in Korea because Jim Carry learns Korean, so there's a part about that and it's pretty funny.

Anyway, while Ellie and I were waiting for the movie to start, I saw a Playstation 2 sign above the door to a business.

"Aw, right! I reckon it's a place were you can play Playstation 2," Ellie said in her British/New Zealand accent.

So I went down to check it out... and sure enough, there were 20+ flat screen TVs in there with comfy chairs and a bunch of people playing Playstation 2.

And as if THAT isn't amusing enough - there's something much more interesting.

When you walk in, there's a little book where you can choose what game to play. There were quite a large number of games. Of the 20+ tvs, about 8-10 were being used... and EVERY SINGLE person was playing the newest FIFA game on it!!! I kid you not. That FIFA game is SOOOOO popular here. Everyone comes in to play THAT ONE game... and nothing else. Hilarious! So I secretly snapped a picture. :D 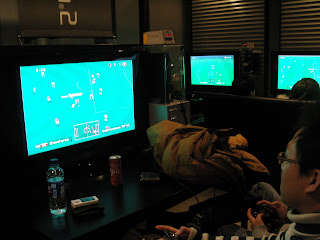