Want to start a restaurant in Korea, but think rent is too expensive? Or perhaps the location you always wanted is taken? Or maybe it's too far from home? Well YOU'RE IN LUCK!!!

It so happens that in Korea - you can take your restaurant with you! OFFICIALLY, these restaurants are called, "To-Go Carts", just translate that phrase into Korean.

They have this rolling counter-top, probably about 4x6ft - and it has a little roof over it. That's where the large tent-like canopy comes from. And this cart has little plastic stools that sit on the counter and EVERYTHING you need tucks into it. It takes quite a while to set up everything or take everything down, but you can roll this little restaurant to the best locations in Seoul (although, I don't know how the system REALLY works, here. Once you have a location, they always seem to go back to that location).

Anyway - it's interesting... in the middle of downtown Seoul, among the skyscrapers - it's interesting to see little tent restaurants. It's like, Korea has two cultures mixed - old and new. I'll talk about that in another post. But these little restaurants are pretty cool (although, to my dismay, they most often sell SEAFOOD. YUCK.) And it's Korean tradition to eat here. It's pretty cool. I'll snap some better pictures > but for now, here's what you get! 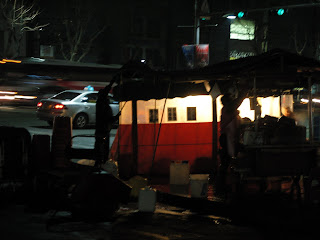 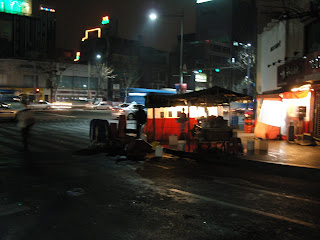 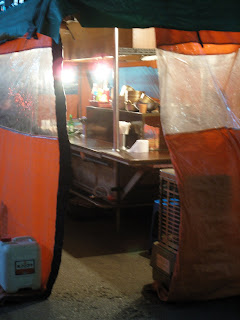 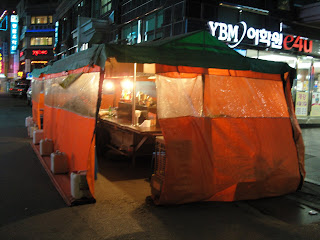